After four hard days of walking, the Alberto Contador Foundation’s full expedition went up at 6:00 am on Wednesday, December 7, on the bus that brought them home. Gone was an experience that few imagined, both because of its level of physical and mental demands. Surely ‘El Camino de Santiago’ had left its imprint. 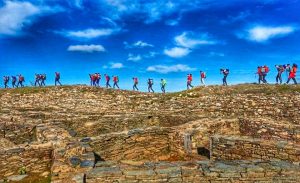 Since the night of December 2, the 44 members of the Alberto Contador Foundation (29 cyclists plus members of the technical staff and staff of Polartec) left Pinto (Madrid) until their return on the morning of day 7, the effort and the constancy to overcome the challenge of the Way have been the tonic.

The riders did not know until a week before that the objective was Santiago de Compostela. They had only been instructed to prepare their backpacks and legs for a long walk. When they discovered the purpose of their trip, the excitement was enormous. How were they going to do it, what was the plan, how many kilometers would they walk? … Some, even, had never heard of this pilgrimage or knew very little about it.

Very easy. They were going to walk the last five stages of the Camino de Santiago in four days, taking the time to return to work and training as soon as possible, but with a nice experience in the backpacks, after a break of four days of intense coexistence between people who in many cases were going to meet for the first time and should collaborate and lend a hand as many times as necessary. Question of cultivating friendship, solidarity and fellowship.

The first day was already a challenge. After spending the night on the bus and getting a little sleep, the pilgrims arrived in Sarria, theoretically situated 112 kilometers from the Plaza del Obradoiro, still at night and at a few degrees of ambient temperature. Right there, as they made time to put the first stamp on the Pilgrim’s Credential, they took a quick breakfast of milk and cereals to gather strength and, without time for anything else, began the route that would lead them to embrace the Saint four days later.

That first day was the shortest in kilometers, little more than twenty, but added to the trips that the majority had accumulated, left exhausted to the pilgrims, who took all the juice to the sober berths of the hostel of Portomarín that sheltered the first night and where they began to heal the first blisters on the feet of those who had least walked in the previous weeks. The best, the weather, because Galicia received the Alberto Contador Foundation without rain and much sun, almost miraculous conditions that were fortunately held until the last day.

The expedition made the Camino de Santiago carrying in its backpacks with all the impedimenta, from the technical clothing, provided by Polartec, the main sponsor of the Foundation, to the sleeping bags and food utensils. The only luxury, a car of support in charge of the provision of midday, given the difficulty of finding food on the way for so many people, and same for breakfasts. The weight of the backpacks was also passing its bill with the passage of the kilometers, increasing the difficulty of the walk and its physical exigency, given the lack of custom of the cyclists, habituated, precisely, to the contrary, to remove the maximum possible weight of their machines.

The big challenge, however, came in the final day, with 40 kilometers to go, that eventually, between trips from the hostal of San Lázaro to the center of Santiago, ended up adding 50 kilometers on the walkers’ legs.

The wake up was at two in the morning, after only four hours of sleep for those who went to bed earlier. Five hours of darkness and intense cold before dawn awaited them as a breakfast and as a modern ‘Santa Compaña’, the frontal lights of the members of the Alberto Contador Foundation illuminated the ancient traces of the Camino de Santiago to arrive without loss to the Plaza del Obradoiro.

After overcoming the hard night stretch and two stops to replenish forces and heal the wounds on the feet, the walkers arrived at Mount of Joy at two in the afternoon on Tuesday, December 6. At some point it had been necessary to lend a hand with their backpacks to the most exhausted, but in the end, each and every member of the team managed to meet the goal and reach the Cathedral of Santiago by their own foot, to launch a last shout of joy under the shadow of the imposing Cathedral, masked by the scaffolding of its umpteenth restoration.

The Alberto Contador Foundation’s building camp ended when the pilgrims saw their name printed in Latin in their respective ‘Compostelas’, after the visit and ritual embrace of the Saint and silently request the fulfillment of some future goal. After all, they had already done their part. The Alberto Contador Foundation also left the Obradoiro stronger and more cohesive to face the next season. The pedometer then marked 136 effective kilometers of walking. Ahead there are now many thousands by bicycle full of excitement.