The teams of the Alberto Contador Foundation have been chosen by ROTOR for product development throughout 2017; the teams will be the only ones equipped with UNO for the coming season. ROTOR UNO is an exclusive, hydraulic groupset manufactured entirely in Madrid, of which only 2,000 units will be distributed during the next year. 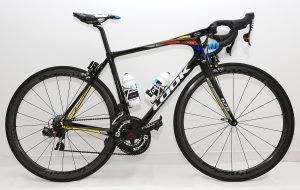 ROTOR has chosen the Alberto Contador Foundation, with which it has collaborated as supplier to the Foundation’s Junior and U23 teams for the past five years, to continue the development of this revolutionary groupset. As the only hydraulic groupset currently available on the market, among its other virtues it is distinguished by its modest weight: only 1,604 grams (not including cranks).

The Alberto Contador Foundation will install on their LOOK bikes, with which they have been competing with since 2016, the new UNO groupset. ROTOR has been developing the product during the last six years and guarantees its performance in competition during the next season.

Among UNO’s characteristics – in addition to its aesthetics – its low maintenance stands out as an advantage. Hydraulic technology can endure extended use without the need for servicing, since it isn’t necessary to recharge batteries, as is required by electronic groupsets. Also, no need to replace cables with UNO, since shifting is actuated by fluid and not by cables, as with mechanical systems.

UNO has been designed to be used with both conventional bikes and those equipped with disc brakes, in which case the weight is 1,655 grams and achieves status as the lightest disc brake groupset on the market. “Lightweight” also gets double-billing through UNO’s 11-cog cassette (11-28), which weighs in at only 135 grams.

For the 2017 season, the POLARTEC teams of the Alberto Contador Foundation will collaborate with ROTOR to help develop new products. They have been saddled with the responsibility to test this innovative groupset to the limit in competition. UNO is the first in a new range of products that ROTOR will develop in collaboration with the Alberto Contador Foundation. For this, they will be assisted by ROTOR personnel, who will perform on-the-spot monitoring of the entire range of ROTOR products used by the POLARTEC teams.