Carlos Rodríguez, cyclist from Granada of the Kometa Cycling Team, retained his title as Spanish time trial champion in the youth category after winning this rainy Sunday in San Román de Candamo, in a 14.2 km race in which the title was at stake. 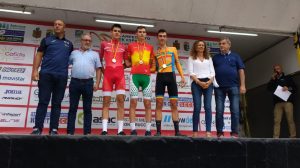 The Andalusian, who was setting the best time in all partial, ended up stopping the chronometer in a time of 19:43, almost half a minute better than the record of so far leader Igor Arrieta (20:11). With 20:18, the bronze medal went to Alicante’s Juan Ayuso.

“I punctured about two and a half kilometres to the finish line and from there until the end I had to ride with the rim touching the ground”, explains a Rodríguez who also had to manage the presence of rain. The cyclist from the Alberto Contador Foundation has already won the gold medal in this discipline in the last edition, held in Soria.

“In the end we only had a fairly light rain and although the curves were a little dangerous could be traced well. That puncture was an added difficulty, but I was able to overcome it. From the car they told me to change my bike, because there was a risk that the tubular would come off at any time and that meant a fall. But I saw the finish very close and I decided not to change,” he explained after climbing the podium.

Very close to the medals was Fernando Tercero, the second of the three riders of the Kometa Cycling Team who finished in the top ten of this time trial. Third finished fourth, with a time of 20:24.

“I’ve been feeling really good these last few days and yesterday, while I was inspecting the time trial, I knew it could come in handy. It was a hard time, especially the first part. I felt really good there. Then I had a bit of bad luck with the weather, as I came out of the first, when it was raining more, and facing the end stopped. But I’m staying with the good feelings I’ve had,” said Tercero.

The Catalan Gerard Bofill, for his part, after scoring a time of 21:05, finished ninth. Two other riders from the Alberto Contador Foundation’s youth team took part in the race: Francesc Bennassar finished with the 26th best time (21:56), Alejandro Luna with the 28th (21:57).