The velodrome of Palma de Mallorca hosted during this weekend the second round of the Spanish Track Cup, which could not be played all the program due to the consequences of the action of the Gloria storm in the Balearic Island, which caused several leaks whose appearance caused the suspension of the competition for safety reasons.

Joan Martí Bennassar and his brother Francesc Bennassar, member of the junior team, gave presence to their respective sports structures during the Saturday, in the Omnium competition. The appointment, in addition, put in game the national titles of the discipline. The participation of both of them is an ideal end to weeks of training at home before starting, this week, two concentrations with the Kometa-Xstra of their category in the facilities of Oliva Nova Beach & Golf Resort. 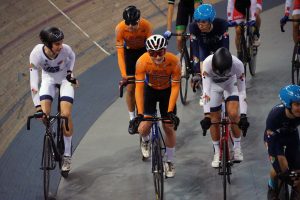 “The main objective is the road season and I’m really looking forward to start the concentration, but the track world is fun, it allows me to force the machine a little bit and also to achieve that speed and reflexes plus that always comes well. In all the races he went very fast. Then you see the data and during the ten minutes you are completely over the threshold, you go full speed, you don’t have a moment of respite. You work on the cadence a lot. You also take into account the imminence of the concentration and do not take risks, nor do you want a fall that disrupts the start of the season, “said Joan Marti. The oldest of the Bennassars finished thirteenth, with 38 points.

Sunday’s match was scheduled for Francesc Bennassar’s Madison, where he was to compete alongside Marc Terrasa, who had won the national youth Olympic title on Saturday. “I really wanted to do this race with Marc and to have this reference for the Spanish Championships in Galapagar, but it couldn’t be. We had warmed up and everything when the decision was made”.

“Saturday was a day to enjoy and suffer. These very short tests of fifteen minutes at full throttle were very hard for me, but I think they have given me a little point. The track gives you that little point of getting in the pack, which always comes for the road. And it was also a contribution to the Spanish National in Madison. I haven’t taken any risks either. My objectives are clearly on the road, I want to arrive very well at the beginning of the season and a silly fall can annoy you at the beginning of the course” concludes Francesc.