The restaurant chain ‘La Mafia se sienta a la mesa’ hosts for the third consecutive year the Selection Camp of Alberto Contador Foundation in Zaragoza, where will held next 23, 24 and 25 September selecting new riders that next season will join the Junior team of Contador Foundation. 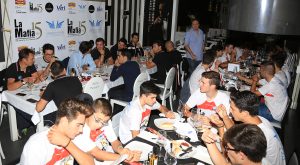 This is the fourth edition of Selection Camp of Alberto Contador Foundation and the third with the sponsorship of ‘The Mafia sits at the table’, which shows the strong linkage between the two entities, who are linked by a number of common goals and values, such as promoting sport among young people and the realization of solidarity activities, such as the fight against stroke, where ‘the Mafia’ also works significantly.

In the fourth edition of the Selection Camp will take part 24 young cyclists, cadets or juniors freshmen, among them will be selected those who cover the vacancies of RH+/POLARTEC that next season will occur, both for leaving the team or by passing to the RH+/POLARTEC U23, where will continue his sporting career.

Training activities scheduled for this weekend will take place in the Liceo Europa College and Angel Santamaria pool, both in Zaragoza, while all participants will stay at the hotel Zenith Don Yo. At all times they will be accompanied by team officials of the Alberto Contador Foundation, which will guide them in various activities.

The closure of the activities will be on Sunday September 25 with a bike ride to the monument to the Virgin of Dorleta, a reference for all cycling fans in Zaragoza, at the foot of which an offering will be made by all participants in the cycling ride.

In addition to the sponsorship of Selection Camp, ‘La Mafia se sienta a la mesa’ collaborates with Alberto Contador Foundation donating 1% of the entry fee of new franchised restaurants, creating the so-called ‘Alberto Contador Solidary Pizza”, with which it donates 10% of its sales value and, finally, with the completion of various sporting events of national character, all focused on raising funds to devote to the fight against brain stroke.