This Saturday the competitive activity returned to the Trophy Víctor Cabedo of the hand of the Team time trial that was celebrated in the streets of Vila-real, before the Sunday Memorial Joan Bautista Llorens that closes a new edition of this test castellonense at the same time that it receives the initial pistol of the Spanish Cup of the category. The Kometa Cycling Team, the last of the formations to compete, extended its dominion of this discipline with a new victory. 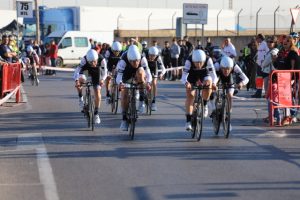 This Saturday’s victory is the sixth victory of the junior structure of the Alberto Contador Foundation in the time trial by Cabedo squads, a success that was only resisted in the 2016 edition and that gives continuity to the two successes of last weekend achieved by Carlos Rodríguez, in Onda, and Raúl García, in Segorbe.

The Kometa Cycling Team made up of Juanjo Rosal, Javier Serrano, Raúl García, Pablo Gutiérrez, Carlos Rodríguez, Manuel Jesús Carrellán, Fernando Tercero and Gerard Bofill completed the 6 km of the stage at an average speed of over 50.2 km/h, ahead of Bathco in six seconds, Antiga Casa Bellsolá in ten seconds, Salchi-Iberauto in fifteen and Tot Net-Tarrasa in eighteen seconds.

“The stage went very well, I think that the conjunction of the team has been almost perfect. It’s a pride to be here as director. In the corners they did very well, they barely noticed the whip. The truth is that in recent times the team is doing a great job, something that comes from the humility and effort of all the boys in their day to day, “emphasizes the Cantabrian Guillermo Gutierrez.

In the general classification, after this third stage that reinforces the leadership of the Kometa Cycling Team in the always appreciated overall team, is maintained with Javi Serrano in front, with six second margin over Fernando Tercero and Raúl García and 2:24 over Carlos Rodríguez.