Away from the roads now because of the aftermath of a heavy crash in the descent of the Sanctuary of Acebo, in the last Vuelta a Asturias, a year ago Michel Ries starred in some of the best moments of the first year of life of the continental structure of the Alberto Contador Foundation on the roads of the Tour of l´Ain. In a very disputed race, the Luxembourger moved among the important men and finished eleventh in the hardest stage, the final in La Faucille, conquering the same classification in the overall final. It was not the only brilliant sparkle of the team, with a very active Isaac Canton who capitalized many minutes of the television broadcast of a first stage in which, thanks to his getaway, ended up being designated the most combative of that day.

The Kometa Cycling Team has evolved a lot this year at all levels, but the starting point for going to the French routes is the same as then: never lose face to the race, run without complexes, show ambition and cohesion. The crash in the Principality disrupted the plans of Ries, who initially had this race on his calendar. Isaac Canton will be the only one to repeat that formation. Juan Pedro López, Stefano Oldani, Samuele Rubino, Daniel Viegas and Antonio Puppio will complete the sextet of the Madrid squad, once again the only Spanish team that will be part of a very French squad made up of up to three WorldTour formations and eight professional continental teams. An additional difficulty to grow up with. In the Ries distance he continues to face a recovery that is progressing well: “I’m feeling much better every day and I’ve already started to roll again”. 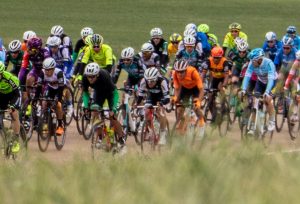 The Tour of l´Ain proposes a demanding route, with a very favourable first stage for a massive finish or the pulse between a breakaway and the pack and two not excessively long which, however, will have a high finish within the Jura Massif. First, La Faucille, the end of the party a year ago. And then, big words, the Grand Colombier, a colossus of 1,501 meters of altitude that returns to host a final stage for the first time since 2011 (when it was imposed Thibaut Pinot). It has rained a lot since then and the race has changed no less. In those days the Tour of l´Ain was still held during the month of August and was developed on up to five stages. Since last year, reduced to three days, it has moved at the end of May.

The great mountain of the zone, a paradise for the practitioners of this sport with several possible slopes, brings good memories to the sports structures of the Foundation. From a much more global point of view, its ramps were one of the enclaves in which an important triumph of a junior cyclist was conceived, today in the Kometa Cycling Team sub23, that of the Catalan Álex Martín in the general Tour of l´Ain juvenile. In the end, from Culoz, the slope that will be faced in this Tour of l´Ain, are more than eighteen kilometers of ascent, with an average slope close to 7% and ramps of 14 and 15% in some sections. “I haven’t climbed it yet in the race, I’ll have the pleasure on Sunday. But just for the profile is nice, nice,” say with a smile Juan Pedro López. A test of great demand before the imminence of the Tour of Hungary, which starts in two weeks.