Juan Camacho from La Mancha finished in the thirty-third position of the time trial that this Friday put the national title of the modality into play in the town of Vall d´Alba in Castellon, where the Biscayan Movistar Jonathan Castroviejo (Sky) fulfilled all the predictions and took the highest podium in which he was accompanied by the Izagirre brothers (Bahrain-Merida), the silver Gorka and the bronze Ion. 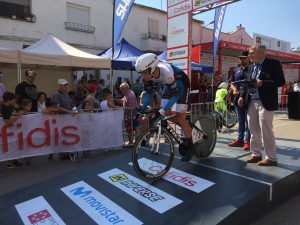 Camacho, the eighteenth runner among the 46 participants to take the start, did not have a fortunate participation due to mechanical issues. Two inopportune punctures hampered his performance when, for times, he was shooting with prospects of substantially improving the 54:57 that he set at the finish line.

“In the beginning I had a good feeling, I was in the third half and I wasn’t riding at full throttle. I was regulating very well.  But in the second half of the time trial I had to change bikes twice and I lost my full concentration. And when you get distracted it’s much more difficult to maintain that level of demand and suffering…. The final feeling is that it’s been a bit of a disaster, but now the only thing to think about is Sunday”, says the cyclist from Moral de Calatrava.

“You have to be very proud of Juan, because sometimes he has never stopped fighting. And when you do everything in your power to achieve a good goal and give it your all, you can never blame yourself for anything,” says director Jesús Hernández.