Marc Brustenga, with a spectacular victory in the prologue of the Ain Bugey Tour, inaugurated a great week of the Polartec Junior Team in French lands. The team also added a seventh place in the final general classification of Carlos Garcia, who has managed to rub shoulders with the best promises of the European peloton. 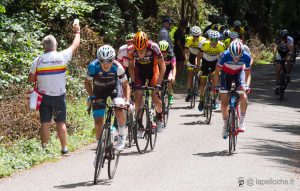 Only one second behind Brustenga finished the other specialist of the team, Joan Martí Bennassar, completing that first day Carlos Garcia, which made possible the teams victory in the prologue of 2 km with which began the race.

Carlos Garcia was the leader of the Polartec when entering the decisive cut of the first stage, where was decided the race among the strongest of this select squad. In turn, Marc Brustenga was able to demonstrate his speed in the tight sprint of the fourth stage, which decided the photo finish.

The race, after the first selection, finished deciding in the queen stage, the last of the six days of competition, with four first category climbs. Carlos Garcia again confirmed expectations by running with the strongest men, which earned him a phenomenal seventh final place.

The Vuelta a Valladolid will be the next rendezvous of these riders along with the teammates who have run in Spain hte penultimate race of the Spanish Cup and especially the Madrid Championship, where on Saturday won Hugo Sampredro, second rider of the Foundation Alberto Contador who gets it after Diego Pablo Sevilla, four years ago.