The presentation was attended by the Secretary of State for Sport, José Ramón Lete, as well as the President of the Spanish Cycling Federation, José Luis López Cerrón, who with their presence wanted to support the fifth season of a project that continues to work for the promotion of cycling and young cyclists. 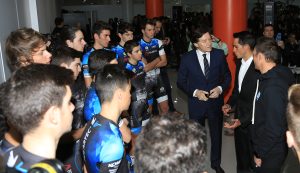 José Ramón Lete highlighted in his speech the merit of carrying out an initiative like this one, which also joins sports with solidarity activities such as Bikes for Life, promotion of bicycle use, and fighting against stroke. Lete thanked Alberto Contador for his commitment and wished all the riders of Polartec success in their incipient careers.

The team’s top sponsors, led by the American Gary Smith, president of Polartec, that showed his pride in working together with Contador brothers, Alberto and Fran, and ratified his commitment with the project by announcing that extends the team’s sponsorship through the 2018 season. Gary Smith also announced that Polartec teams will travel to the United States at the end of this season to conduct a special training camp on its sponsor’s land.

Jose Miguel Aparicio, general manager of Skoda Spain, was the host of this presentation, which was carried out at the dealership that the brand has in Móstoles. Aparicio highlighted the link to cycling, because Skoda started precisely as a bicycle manufacturer. He also said he was delighted to start collaborating with the Alberto Contador Foundation because along with cycling it has other solidarity objectives not less important than the promotion of the sport.

There was also a chapter reserved for the social work of the Alberto Contador Foundation, in this case for Bikes for Life project, which was presented today by Susana Pato from Ananta Foundation, one of those involved in it with the Seur Foundation and Association of Disabled from Pinto. Susana said that since 2012, more than 600 bicycles have been recycled and distributed to more than 20 associations and NGOs, highlighting the actions carried out in countries such as Morocco or Senegal. This year, in addition, the Alberto Contador Foundation will contribute to the Bikes for Life project with the same amount that its riders win in prizes. In 2016 they won more than 5,600 euros.

Ivan Basso, former teammate and always friend of Alberto Contador, did not want to miss the event either, given his position as responsible for incorporating new values into the Trek-Segrafedo team.

Alberto Contador closed the ceremony highlighting the importance of the sponsors who have bet on his Foundation, given the difficulty of finding sponsors for a project in continuous growth and with growing needs. He appreciated the commitment of all of them, from Polartec to Look bikes, to Rotor or Skoda, which emphasized the versatility of their vehicles for a sport as demanding as cycling.

Alberto Contador said he was “very excited about the start of this season with his new team, Trek- Segafredo, the great atmosphere and the desire to do things”. As he has said on other occasions, he noted the Tour de France as the great goal of the year and said that in his recent training camp in Tenerife “the data were very good and we will see what happens in Andalusia, although it is a race a bit peculiar this year, with the first three decisive stages. We’ll see what can be done”.