The Mallorcan Tomeu Gelabert, who in his second junior year had already won in Fuenlabrada and the overall Cabedo Trophy, returned Sunday to the podium with a nice win in the Tour of Valladolid, where his dominance in the time trial earned him to subdue all rivals, and also win the Regularity. The team, where everyone worked without sparing forces, was also key to his victory and, incidentally, to get the teams overall. 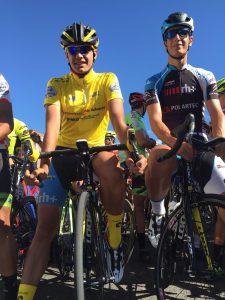 “I’m glad of this race for two reasons, because the team worked perfectly and because Tomeu marked differences in the time trial”, explained after the race Felix Garcia Casas, sport director of RH+/POLARTEC Junior Team. “The race was marked by the breakaway of four riders in the first day. They were the strongest of the squad and among them was Tomeu Gelabert”, continued Garcia Casas. “It was a day of wind, a hard day in which nobody gave permission to the break, but the 4 that came ahead, with 2 minutes, showed their strength and leave decided the General Classification”.

After the events of the first day, the plan was clear, to control the race for Gelabert. In the first sector of the second stage, with an uphill final, Tomeu scratched a few seconds to those who came with him the day before and then, in the 11 km of time trial, in the afternoon, finished the work, endorsing to his nearest rival, Franklin Chacon, no less than 35 seconds, which earned him the lead, waiting only confirmation in the third and final day.

The RH+/POLARTEC showed a good school when working together, no matter that in this case they were reinforced by two riders of the Belgian team Tieltse Renners, with which collaborates the Contador Foundation, and had a special role in the last day, coordinating perfectly with their Spanish peers. Even at this late stage, to enter the head group slightly cut, Tomeu Gelabert got a few seconds more to consolidate his classification and recorded a particularly significant victory for the whole team.