Great harvest of the riders of the Kometa Cycling Team participating in the Spanish Junior and Cadet Championships held in the velodrome of Tafalla Navarra during this Easter, a Nationals where the Madrid Raúl García and Javier Serrano and the Balearic Francesc Bennassar were among the names of the competition. Garcia was one of the most renowned, with two gold medals.

The rider from Tres Cantos, within the framework of an outstanding beginning of the season on the route, exported his good moment to the velodrome conquering the national titles in Pursuit and Scoring. In this last event, held on Sunday, he signed an outstanding performance with an attack with his partner Serrano with 25 laps to go. 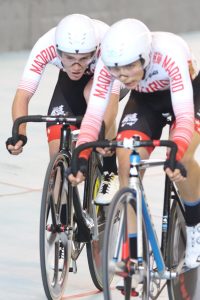 “I am very happy with these results, of course. I was confident that I could do well, because in the only Spanish Cup in which I competed, in Galapagar, I could win. And seeing how I was finding myself in the weeks leading up to the championships I was sure I would do well,” says Garcia. “The ones on the track are very intense races and three days of competition generate a lot of tiredness”.

Quantitatively, however, Javi Serrano would be the cyclist of the Kometa with more preseas in his bag. The Spaniard accompanied García on the podium both in the Pursuit, where he hung the bronze in front of Francesc Bennassar, and in the Score, where he won the silver, two medals to which he would add another bronze in the CRI Kilometer modality and another silver in the male Scracht.

In this last race, precisely, another member of the junior staff of the Fundación Alberto Contador also stood out. The Balearic Francesc Bennassar finished third and hung the bronze medal. “It was a race in which a Catalan, Pau Torrent, escaped nine laps from the end and managed to arrive; and I, the truth, had very good feelings throughout the race,” recalls a Bennassar who adds about his championships: “On Friday, in the chase, I managed to get into the final B for the bronze against Javi Serrano and finally finished fourth. In the Score, I was close to catching Raúl and Javi, ten metres away, but I couldn’t catch them. Four laps from the end the pack caught up with me and I lost the podium options: in the end I did seventh, but I tried”.

The performances of Raúl García and Javier Serrano, their six medals, were fundamental for the Madrid National Team to finish in front of the medal of these Championships.