Today began in the Valtellina (Italy) a great weekend of cycling with Alberto Contador and Ivan Basso as protagonists, as they led the climb of hundreds of cyclists fans to Passo Gavia from the town of Ponte di Legno. 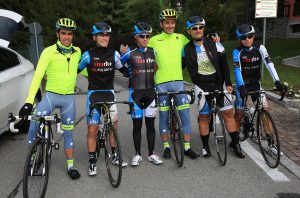 The second and final round will be tomorrow Sunday with the climb to the Mortirolo, in which riders from Alberto Contador Foundation displaced from Madrid will have the opportunity to meet for the first time this mythical mountain pass, as they did today by the hands of Alberto Contador and Ivan Basso with Gavia pass.

Alberto Contador and Ivan Basso confirmed yesterday at a press conference that will continue together next season in the ranks of Trek-Segafredo Team, where Alberto will fight for victory in the Tour de France as his main goal, after having done, he said, “the best possible choice from a sporting point of view” that will be from January his new team.

Ivan Basso, meanwhile, will do alongside Alberto Contador the work of technical consultant, responsible for relations between riders and staff, with a special focus on working with young people, including the riders of Contador Foundation, which will follow very directly throughout the season.

This year has been the fifth season in which Alberto Contador Foundation makes a visit to La Valtellina to offer to its cyclists the opportunity to meet some of the most important mountain passes of cycling history. This time the riders chosen by the team manager, Fran Contador, were Juan Pedro Lopez, Alejandro Ropero and Carlos Garcia, who return home with an experience that will surely mark their careers.