The Catalan Juan José Rosal beat the sprint in the fourth and final stage of the Vuelta a Valladolid Junior Promotion, in which the final general was won by Mario Aparicio (MMR) from Burgos. The Belgian Alex Vandenbulcke, on loan to Polartec-Kometa for this race together with his compatriot Guilles Vercruysse, finished second, just 2 seconds behind the cyclist from Aranda de Duero. 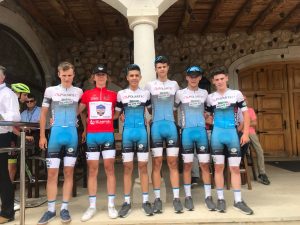 Rosal, in his first win of the season, was the fastest of the group of 40 riders who played the victory in the streets of the capital of Pucela. A group where Polartec-Kometa set the pace and prepared for the finish after Vandenbulcke scored the leader, without success, in the last orographic difficulty of the day.

“I felt very well, after three very fast stages. The race was controlled both by the MMR team and by us, without letting any leaks go. After the third port, the pack was reduced and finally, on the way up to Portillo, in the cobbled part, the selection was completed. With five kilometres to go, we’ve neutralized a leak and that’s where the nerves started. But we managed to put ourselves in a good position and impose ourselves in a very nervous and dangerous sprint,” explains Rosal.

The Polartec-Kometa, who finished the round as the best team in Valladolid, a highly valued award within the junior structure, has placed three of its riders in the top ten. Thus, in addition to the second place at Vandenbulcke, Javi Serrano from Madrid finished sixth and Rosal himself finished ninth.