The Colle San Rizzo´s summit is at an altitude of 446 metres and in its surrounding landscapes the inhabitants of Messina, the great city at its feet, find a space for recreation in nature. A green lung full of possibilities for multiple outdoor activities. And in its surroundings there are also some viewpoints that offer unforgettable panoramic views over the Strait of Messina that separates the island of Sicily from mainland Italy. On the ramps of this small colossus, a dozen kilometres with very constant slopes of around 5-6%, the Manchego Isaac Cantón cemented the presence of the Kometa Cycling Team on the Milazzo podium this Wednesday. And the honour of wearing the ‘Maglia Verde Pistacchio’ this Thursday. 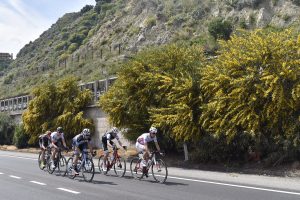 The rider from Argamasilla de Alba was one of the six members of the escape of the day, an escape formed in the first third of the day by the Colombian William David Muñoz (Coldeportes), the Norwegian Krister Hagen (Riwal Readynez), the Romanian Daniel Crista (Giotti Victoria-Palomar) and the Italians Dario Puccioni (Sangemini) and Davide Baldaccini (Team Colpack), who got to ride with more than five minutes of advantage over the pack. Before Cantón had tried in the first kilometers, without success, the Granada José Antonio García. The sextet would face Messina’s intermediate sprint in the lead and would also reach the port leading the race. In its ramps, in its final part, Canton went to the attack to ensure this classification. Already in the descent, he was involved in a small fall, without serious consequences. 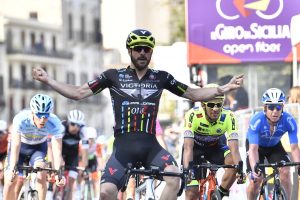 The adventure would definitely end within the last 20 kilometers against the efforts of the professional Italian continental team Androni Giocattoli, involved in safeguarding the interests of his sprinter Manuele Belletti. After a very fast approach to the finish line, at speeds of over 60 km/h on winding roads with great views over the Capo Milazzo and its surroundings, in the mass arrival the Italian Riccardo Straccioti (Giotti Victoria-Palomar) ended up imposing his speed, who also became the first leader of the race. Italy’s Antonio Puppio, fifteenth, was the first rider at the finish line in a Kometa Cycling Team whose strong men for the general standings, Spain’s Juan Pedro López (77th), Luxembourg’s Michel Ries (63rd) and Italy’s Stefano Oldani (73rd), arrived in the main pack saving the day without further incidents. 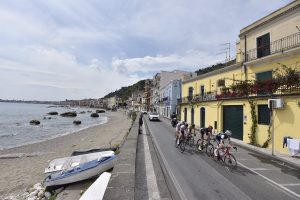 “The mountain leader’s jersey is the reward for having been on the run. Although I didn’t have my best sensations, I was clear that I had to give everything, because there was the option of being able to climb the podium. On the descent I had a fall, but everything is fine. And this Thursday we are going to start all over again”, says Cantón after the podium of this first stage.

This Thursday there will be a marathon run in the second stage that will unite Capo d´Orlando and Palermo over 236 kilometres. A very demanding day due to the mileage and the ‘entroterra’ route that will lead the riders to face a very sinuous terrain and climb the high score of Geraci Siculo (1090 metres altitude, fifteen kilometres of ascent). “Now we are going to recover well. And tomorrow, more and better. And above all to continue enjoying this beautiful race. It’s incredible how many people move, it seems like it was the Giro d’Italia”, concludes Cantón.